Can social norms affect households’ savings behaviors? Research findings in Social Norms and Household Savings Rates in China suggest that the filial piety social norms, which argue that children have unconditional obligations to their elderly parents, make households save less.

Household savings in China have increased significantly over the past few decades. Many theories have been proposed to explain this rising trend. However, existing theories take the culture and social norms in China as given, even though social norms do evolve. In this paper, researchers Yvonne J. Chen, Zhiwu Chen and Shijun He show that the changes in social norms might be a driver behind the continuing rise in household savings rates in China.

The filial piety social norms emphasize children’s obligation to their elderly parents. Hence the strength of the filial piety social norms affects the reliability of intra-family, intertemporal risk sharing arrangements. This in turn affects savings behaviors. In order to show the relationship between social norms and households’ savings behaviors, the researchers construct two measures of the filial piety social norms. The first measure is an innovative Confucian index that computes the percentage of respondents in a given locality who choose “for older-age support” in response to the question “why do you want to have children?” This index is constructed using the China Household Finance Survey (CHFS). The Confucian index indicates the degree to which filial piety has influenced the local culture. A higher index value indicates lower chances of default on repayment obligations by children and consequently more reliable returns from parental investment in children. The index measures the reliability of the implicit intra-family financial contract in a given locality. The researchers use the percentage of four-generation households in a region as an alternative measure of the filial piety norms. The four-generation household measure is directly calculated from the 2010 census and matched with the CHFS data.

The researchers show that even within China, influence from the filial piety social norms varies significantly across regions due to historical and cultural reasons. In the full sample, 57.8% respondents choose “old-age support” as a reason for having children. On average, 42.9% of people living in mega-cities (e.g. Beijing and Shanghai) views children as old-age investment. Moving from the top-tier cities to provincial capital and to rural villages, the percentage (hence the value of the Confucian index) exhibits a clear rising pattern, implying a strong negative correlation between development and dependence on children for old-age support. There is also a negative correlation between the filial piety social norms and average savings rate at the county level. For every 1% increase in the Confucian index, the average savings rate decreases by 0.23%.

Using a subsample of urban nucleus families from the CHFS data, the researchers further find that for every 1% increase in the Confucian index, the savings rate gap between son and daughter families decreases by 0.33%. Similarly, for every 1% increase in the four-generation households in a county, the savings rate gap decreases by 11% 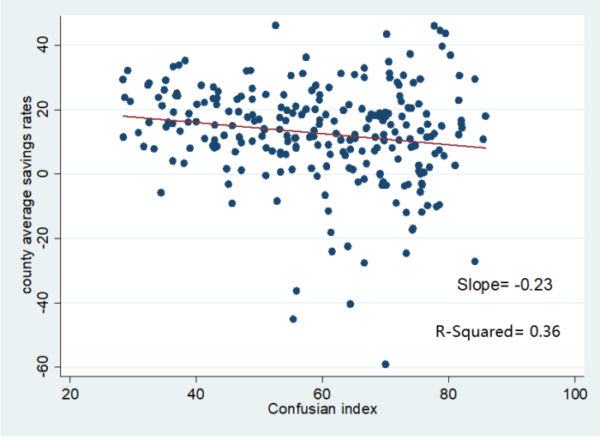