Institutional investors collectively account for the majority of ownership of many firms but individually hold fractional stakes in any given firm. Without coordination, they have limited incentives to commit resources to activism.

In Collective Action and Governance Activism, we examine how an investor collective action organization (ICAO) enhances activism by institutional investors. We study the governance activism conducted by an ICAO called the Canadian Coalition for Good Governance (CCGG). CCGG was formed in 2003 after a change in proxy solicitation laws lowered the expected costs of collective action. A group of institutional investors voluntarily created CCGG to further their common interest of improving the corporate governance practices of Canadian public companies. CCGG’s membership includes some of the largest institutional investors in Canada and together, they manage approximately $3 trillion (CAD) in assets. CCGG directly engages firms via letter writing and via private engagement meetings with independent board members.

There are at least three frictions that limit the likelihood that a single investor with a small ownership stake engages in governance activism. First, a single investor incurs all costs of taking action but receives only a fraction of the benefit – a free-rider problem. Second, management can take actions that reduce the likelihood the board accepts a proposal, such as limiting an investor’s direct access to the board. Third, some institutional investors have other business relationships with firms, such as managing a firm’s pension assets. Such investors, termed “pressure-sensitive”, could jeopardize their business relationships by engaging in activism. To increase activism an ICAO must mitigate these frictions.

We have three main findings. First, the creation of CCGG significantly increases activism incentives compared to those of a single institutional investor. On average, its members’ aggregate dollar and percentage holdings and voting power are four to six times higher than those of the largest single institutional investor. Pressure-sensitive investors, who are otherwise less likely to engage in activism, account for two thirds of CCGG’s ownership stakes. Second, CCGG’s access to a firm’s board, and the likelihood that it targets a firm for engagement, increase significantly with its dollar holdings and voting power. Third, the CCGG has an impact. Abnormal stock returns around the announcement of CCGG’s formation are larger for firms in which CCGG has greater dollar holdings and voting power (i.e. firms CCGG is more likely to engage). Firms engaged by CCGG are at least 58% more likely than non-engaged firms to adopt its governance proposals that include adoption of majority voting, say-on-pay, and specific compensation policies (clawbacks, capped pensions and performance peer groups). Engaged firms also increase CEO incentive pay.

Taken together, the evidence suggests that members’ objectives for CCGG were met – through collective action, members better served their common interests to improve firms’ governance compared to outcomes arising from individual, unorganized actions. In recent years, two new ICAOs have formed, The Investor Forum (IF) in the U.K. and the Investor Stewardship Group (ISG) in the U.S. Both of these ICAOs have characteristics that are similar to those of CCGG. 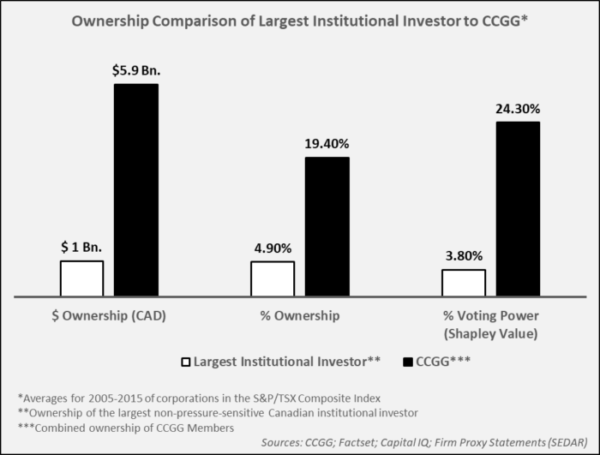