Our paper “Managerial Short-Termism and Investment: Evidence from Accelerated Option Vesting” helps to fill this gap. It provides new evidence that CEOs with more short-term incentives spend less on long-term investment. We start from the insight that CEOs’ incentive horizons are determined largely by the length of the vesting periods on their equity pay grants. Short vesting periods make it more likely that CEOs pump up the stock price and then quickly sell their shares at a profit. Investment cuts are a plausible target for myopic CEOs, because investors may only realize the long-term consequences years down the road. Therefore we examine whether CEOs reduce investment when vesting periods become shorter.

To examine this question, we exploit a unique event that led 723 firms to eliminate vesting periods on CEO stock options. FAS 123-R was adopted in 2004 and required firms to expense option compensation costs in their income statements. It created retroactive expenses for options granted years earlier that had not yet vested. Yet firms could avoid charges by accelerating options to fully vest before FAS 123-R’s compliance date. Option acceleration led to a 78% decline in CEO incentives from unvested equity – the single-biggest reduction in incentive horizon observed at these firms over a ten-year period (see figure). 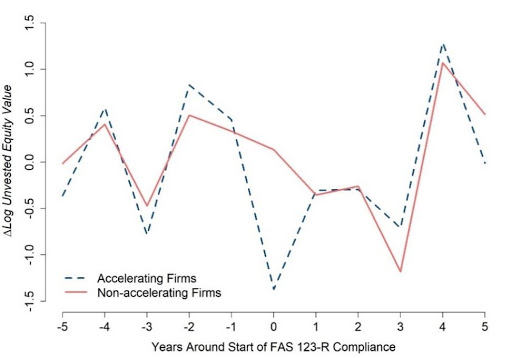