Stock markets across the globe universally enjoy high returns on days surrounding FOMC meetings, which account for the bulk of the global equity risk premia in recent decades. However, there is no comparable result for other central banks either internationally or, more surprisingly, domestically. Similarly, the world CAPM explains the cross-section of returns only during FOMC announcements.

Neither announcement surprises nor currency moves drive these findings, which hold even for stocks whose operations are focused on the domestic economy. The difference in announcement premia is not explained by economy size, multinational exposure to the U.S. economy, or central bank policy activism and toolkit.

We conclude that the Fed exerts a unique impact on global equities. Consistent with this hypothesis, uncertainty drops across global markets following FOMC announcements but not those of other central banks. 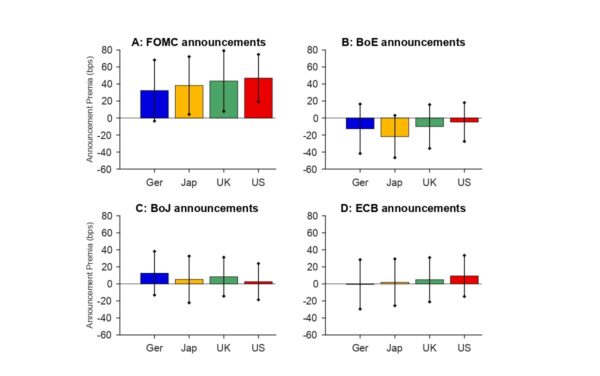