“Forgive but Not Forget”: The Behavior of Relationship Banks When Firms Are in Distress

Relationship lending constitutes one of the most important comparative advantages of bank lending to firms. When engaging in relationship lending, banks gather soft, proprietary information about their customers in the course of lending. Understanding bank behavior when firms are hit by idiosyncratic liquidity shocks is important for practitioners and academics alike. Firms and their sources of funding when faced with liquidity shocks are vital for the economy as a whole.

In Forgive but not Forget: The Behavior of Relationship Banks when Firms are in Distress, Larissa Schäfer finds that relationship banks tolerate temporary delinquencies of distressed firms without facing higher defaults and earning higher rents in the long run. Combining survey answers of bank CEOs that directly capture a bank’s business model with unique loan-level credit registry data from Armenia, she analyzes the effect of relationship lending on loan performance within firms and across banks. She shows that the same firm in the same time period is 2.9 percentage points more likely to become temporary delinquent on a relationship-based loan relative to a transaction-based loan, an economically significant effect given average delinquency rates of 3.2%. This result corroborates theoretical predictions that relationship banks allow for short-term bad results based on their proprietary knowledge about firms.

The effect does not change even after controlling for observable bank characteristics, adding other relationship lending measures such as length, scope, and exclusiveness of the firm-bank relationship. Unobservable time-varying bank characteristics such as exposures to different sectors or banks’ regulatory capital do not drive the results. Specifically, the same firm enjoys more financial flexibility when it receives relationship-based loans compared to transaction-based loans from the same bank in the same time period.

Next, she examines the long-term effects of relationship lending. Theory predicts that relationship banks tolerate temporarily bad results of good firms as long as they can secure higher rents and future business, that is, they “forgive but do not forget”. She finds that despite higher temporary delinquency rates, relationship banks do not face higher defaults or lower recovery rates when loans mature relative to transactional banks. Relationship banks indeed provide liquidity to good firms in distress that are less likely to become insolvent when loans mature. Relationship banks, however, require up to 1.5% higher return on maturing loans, which constitutes an 11% increase relative to the average return on loan of 13.2%. They are also more likely to secure future business and charge 3.4% higher interest rates on subsequent loans with firms that have been delinquent with them in the past.

What do relationship banks do differently relative to transactional banks that enables them to offer liquidity insurance? When firms are in distress, relationship banks adjust contract terms and offer drawdowns on credit lines and overdrafts but do not inefficiently roll over loans. The paper presents new empirical evidence on how relationship banks extract rents and secure future business, having helped out firms in the past.

Figure: Loan Performance over Time
The figure shows average loan delinquencies above 90 days for small and medium-sized firms that received loans from both relationship and transactional banks in Armenia between January 2009 and June 2013. 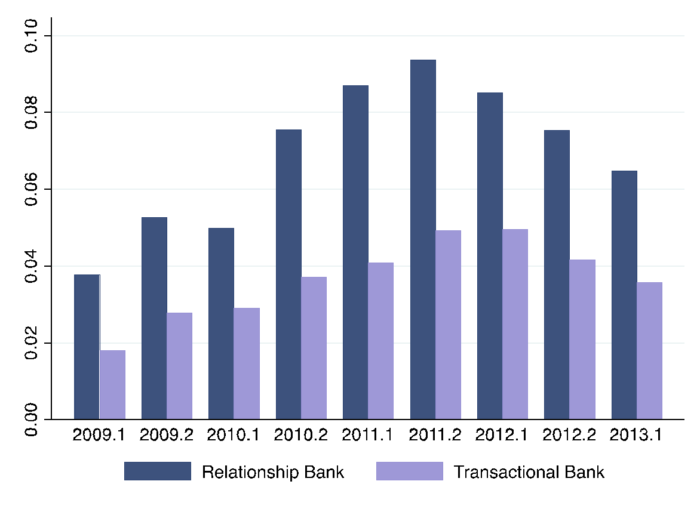