The lead article in Volume 23, Issue 4 of the Review of Finance is Are US Industries Becoming More Concentrated? by Gustavo Grullon, Yelena Larkin, and Roni Michaely. This paper finds that industry concentration has increased substantially in the US over the last two decades. Moreover, this concentration has coincided with a significant rise in profit margins – but not due to greater efficiency. Instead, the results are consistent with higher barriers to entry due to changing technology or lax antitrust enforcement.

A Sharp Increase in Concentration – That’s Widespread and Robust

Gustavo, Yelena, and Roni start by documenting trends in the Herfindahl Index (a concentration measure based on industry sales) in the US. The results are striking – while concentration fell dramatically in the early 1980s, and stayed low for over a decade, it’s risen by 70% since 1997. Moreover, the increase has occurred almost every year, suggesting that it’s a secular trend. 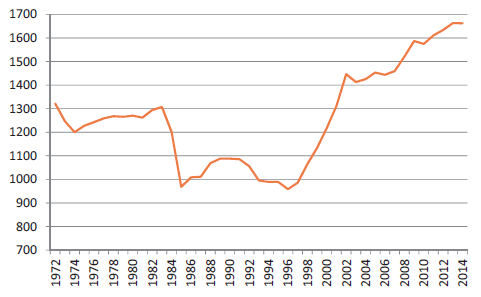 The pattern is closely mirrored by trends in the number of public firms, which has sharply declined since 1997. 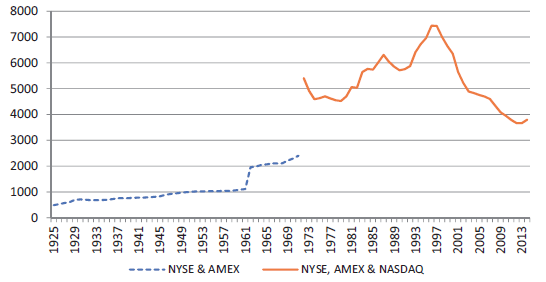 Similar trends have been documented using other measures of concentration. So the paper’s first main contribution is to study whether the growth in concentration is widespread, or confined to particular industries. This is particularly important for policy implications – if it’s the latter, the issue isn’t systematic but may be due to technological changes in certain sectors, and the optimal solutions are tailored rather than broad-brush. The authors find that the decline in competition is widespread – over the last two decades, concentration has risen in over 75% of US industries, with an average increase of 90%.

Moreover, the authors rule out a plethora of alternative explanations. Even though concentration has risen in public firms, perhaps there’s greater competition from private firms that aren’t included in Compustat (their main data source). The authors show similar results when using data from the US Census, which includes both public and private manufacturing firms. Another alternative explanation is that the number of public firms in an industry has fallen due to declining demand. However, they find that this fall is due to a decrease in the number of IPOs and a rise in M&A activity, rather than liquidation. Indeed, the remaining firms are thriving, inconsistent with industry declines.

Should We Be Worried About Rising Concentration?

Even if the increase in concentration is widespread and robust, it’s not necessarily a concern. In particular, Baumol’s “Theory of Contestable Markets” argues that, if there are low barriers to entry, even concentrated industries need to behave competitively – if incumbents try to raise output prices (or lower input prices or wages), new entrants will come in and undercut them. Thus, actual competition doesn’t matter for welfare and economic efficiency, only the threat of competition.

Still, the rise in profitability isn’t conclusive. Higher profits could indeed result from firms’ ability to behave anti-competitively – use their market power to extract more of the pie for themselves at the expense of consumers. But it could be that higher profits result from growing the pie – the incumbents have become more efficient, producing better products at lower cost, and driving out inefficient rivals as a result. If so, these higher profits aren’t at the expense of society – consumers also benefit from better products, and the efficiency gains may be partially passed onto them.

The authors thus study what caused the rise in profitability. Their profitability measure, Return on Assets, can be decomposed as follows:

The Asset Utilization ratio, or Sales/Assets, measures efficiency – a company’s ability to generate sales for a given amount of assets. The Profit Margin, or Profits/Sales, measures a company’s ability to generate profits from a given amount of sales, potentially due to market power. The authors find that the rise in profitability is almost entirely due to an increase in profit margins rather than efficiency. The differences are stark – an increase in industry concentration from the 25th to 75th percentile is associated with a 142% rise in the Profit Margin relative to its median, but only a 6% rise in Asset Utilization.

Alternative Evidence for the Effects of Increased Concentration

The authors cross-validate their main results with evidence from other sources. First, they find that shareholder returns to an M&A deal are higher when the acquirer is in a more concentrated industry and buys a target within the same industry. This is likely because such a deal will particularly increase the acquirer’s market power. Consistent with the profitability results, this link is particularly strong after 2000, since when concentration has risen almost constantly. Moreover, this result, as well as the results linking industry profitability to concentration, is robust to controlling for foreign competition – addressing concerns that concentration measures only study competition from domestic firms.

Second, the authors find higher abnormal stock returns to industries that have become more concentrated. A strategy of buying (selling) industries that experienced the greatest (least) increase in concentration over 2001-14 would have earned 6.6-8.2% per year. Thus, any benefits from increases in market power fed through to shareholders.

The other, more concerning explanation, is lax enforcement of antitrust laws. Indeed, a recent Wall Street Journal article placed the first figure above (showing rising concentration) side by side with a graph showing the fall in antitrust enforcement cases filed by the Justice Department over the same period.

These two trends closely mirror each other – the rise in concentration after 1997 almost exactly coincides with the fall in antitrust enforcement after 1997, suggesting that antitrust authorities may have been dropping the ball.

The evidence of this paper, combined with other work on the topic, indicates that the increased concentration is associated with higher profit margins and no increase in efficiency. The excess profits are not funneled to increase investments, R&D, or wages. The findings represent a particular challenge to policy makers – it is difficult to think of a scenario under which the increase in concentration represents an overall economic improvement. For example, Senator Elizabeth Warren, among others, suggests breaking up the big tech companies and perhaps other giant firms, similar to the breakup of AT&T in the 1980s.

But diagnosis precedes treatment. Before engaging in a major policy reform, we must critically assess the evidence. The wisdom of such a drastic action critically depends on the drivers of the recent product market changes, and more research is needed to understand the reasons behind the secular increase in concentration and profit margins. If the major culprit is lax regulations, then breakup might be a sensible idea. If it is a natural increase in barriers to entry due to significant increase in the fixed costs of investment in technology, such breakups may result in throwing the baby out with the bathwater and putting the economy in a significant disadvantage relative to international competitors.