The economy in the United States is strongly influenced by local conditions, but some federal pricing policies are often nationally uniform and do not reflect the heterogeneity of local features across geography. In this study, I focus on one such uniform pricing in the U.S. residential mortgage markets, the conforming loan limit or CLL (i.e., the maximum dollar amount of a home loan that government-sponsored enterprises (GSEs) can guarantee) that was uniform across the U.S. before the 2008 financial crisis.

Prior to 2008, the CLL was adjusted every year by the Office of Federal Housing Enterprise Oversight (OFHEO) to reflect changes in the median house price at the national level, and the CLL was uniform across all contiguous continental states. Following each increase in the CLL, the fraction of jumbo loans under the new CLL would decline disproportionally in certain areas but not so much in others. Since the national CLL could be viewed as largely independent of local economic environments, I exploit the regional variation induced by the CLL as a tool to get cross-sectional variation in local jumbo-loan shares. Figure 1 summarizes the idea of this identification strategy, where the blue areas indicate loans that used to be jumbo loans based on the old CLL but are now conforming loans, and the orange areas indicate loans that are classified as jumbo based on the new CLL.

Figure 1: Identification strategy: the effect of the CLL change 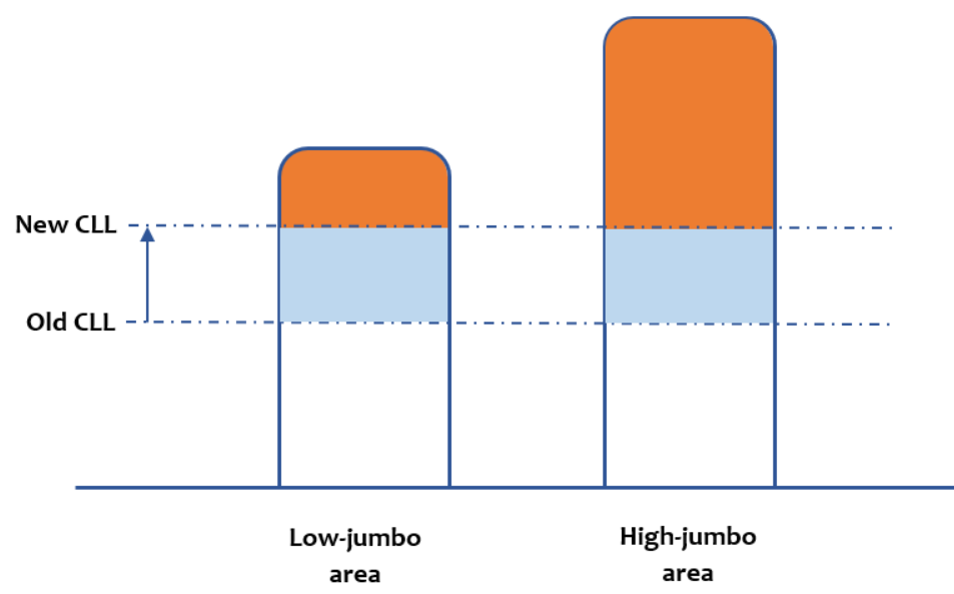 Other than the obvious benefits such as expanding credit supply and supporting house prices especially in low-income areas, I document an unintended consequence of such uniform pricing policy in the residential mortgage market. I show that in areas that experienced a larger decline in the jumbo-loan share following an increase in the CLL, lenders raised jumbo-loan approval rates, lowered mortgage rates to defend short-term market share, extended credit to riskier borrowers, and incurred deteriorated asset quality in the long run. I conduct additional analyses to rule out alternative explanations and address endogeneity concerns, such as credit supply or demand changes, the bunching effect, and reverse causality. My results are not explained away by these factors. Instead, my evidence is consistent with a competition channel: the effect of CLL increases on jumbo-loan credit expansion is significantly exaggerated in a more competitive jumbo-lending market. Overall, my findings suggest that the securitization policies of the government-sponsored enterprises (GSEs) can induce spillovers on the jumbo-market segment and influence credit allocation.