Exploiting the unique institutional setting of Hong Kong’s housing market, we uncover a curious ripple effect of haunted houses on the prices of nearby houses. Prices drop on average 20% for units that become haunted, 10% for units on the same floor, and 7% for units in the same block. The demand shock caused by lower perceived quality rather than the fire sale supply shock explains most spillovers.

A haunted house is where an unnatural death (i.e., accident, murder, or suicide) occurred. In Hong Kong, residents are wary of haunted houses and sellers must disclose whether a house is haunted. Since housing is fairly homogeneous and concentrated in a small geographic area, it is reasonable to attribute the haunted house effect on the prices of nearby units to the spillover effect. Local economic shocks are unlikely to affect haunted and non-haunted units differentially because of the close proximity. As our sample spans 16 years, the flow of haunted houses is large in number. We have a sample size with sufficient statistical power to detect the spillovers.

Are our findings relevant to other parts of the world? Yes. 101 newspaper articles indicate an average discount of 25% on haunted houses in Australia, United Kingdom, and United States. Randall Bell, an economist who consults on stigmatized properties’ appraisals, once told New York Times that the stigma could result in 25% lower prices. Prospective homebuyers in the U.S. can also check whether anyone has died at a given address using websites like www.diedinhouse.com. Few like to live where a recent unnatural death occurred. 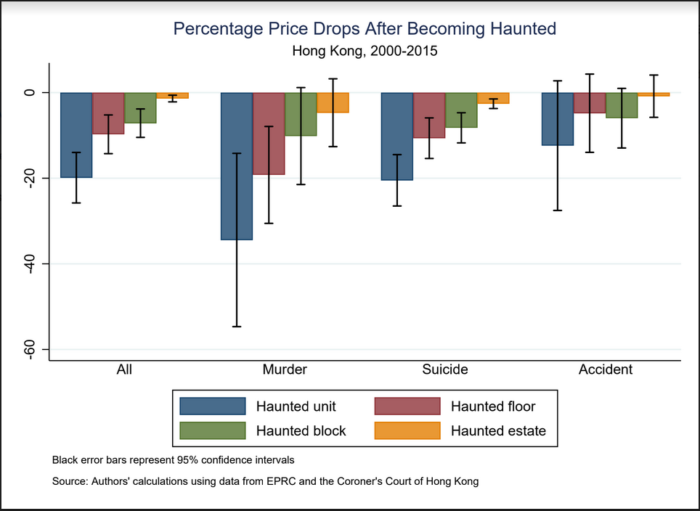