A key feature of the European crisis has been the ever closer link between sovereign and bank risk in the euro area. A major concern of policymakers was the feedback loop, in which adverse shocks to banks led to an increase in sovereign credit risk, and deterioration in sovereign risk, in turn, raised the credit risk of banks. The feedback loop has been blamed for deepening the recession, making an escape from the crisis more difficult.

Policymakers have adopted two principal approaches to dealing with mounting credit risks during the global financial and the subsequent European crisis. On the one hand, national governments implemented bank rescue policies, by providing capital injections, debt guarantees or deposit guarantees. On the other hand, monetary policy played a central role, by providing liquidity to banks on a massive scale and by intervening in sovereign debt markets through outright purchases or by giving an implicit guarantee against a speculative run.

The academic literature has analysed different channels through which these two policy approaches function. Guarantees and capital injections can prevent bank runs, reduce uncertainty, and improve the stability of the financial system. However, if the bailouts are large and imply a challenge to the sustainability of public debt, then such a transfer of risk may actually worsen the outlook for the economy, and lead to sovereign and bank risk moving in lockstep.

In the real world, have these policies reduced sovereign and bank risk? To answer the question, we use daily data for the period 2004-13 and employ a set of simultaneous equation models, which we identify through the heteroskedasticity in the data. We find evidence for a two-way causality between sovereign risk and bank risk, both at the euro area level and in many member states individually. The bidirectional effect generates a strong feedback loop which amplifies initial credit risk shocks substantially. The empirical findings further suggest that there are strong cross-country spillovers of sovereign and bank risk. The spillovers stem from shocks to sovereign risk in the euro area periphery to sovereigns in the core, from shocks to banks in the periphery to banks in the core, as well as vice versa.

Finally, the empirical analysis shows that ECB non-standard policies and bank bailouts by national governments reduced in most but not all cases credit risks of banks and sovereigns (see Figure). They also exerted a large and significant impact on equity returns and credit risk of non-financial firms. Announcements about the Securities Market Programme (SMP), consisting of government purchases, and Outright Monetary Transactions (OMT), implying the conditional commitment to purchase public debt, lowered sovereign and bank CDS spreads significantly. Similarly, bank bailout announcements by fiscal policy makers led to a strong decline in sovereign and bank spreads. For Longer-Term Refinancing Operations (LTROs), the results reveal an interesting yet intuitive difference between the announcement and the actual implementation. While the former was taken as a disappointment by financial markets, with spreads increasing, the latter reduced sovereign and bank risk. 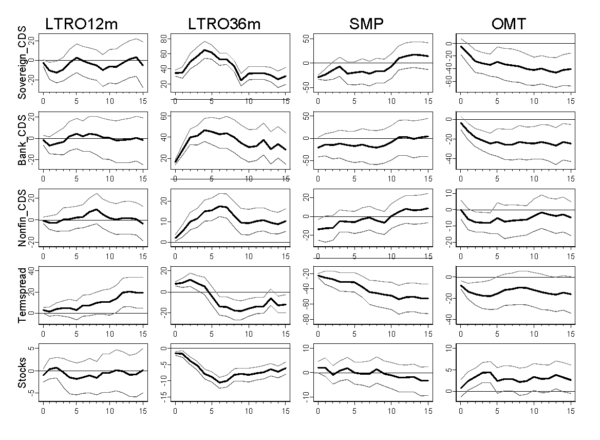