(This post is thanks to Advisory Editor Andrew Ellul)

The lead article in Volume 22, Issue 4, of the Review of Finance is Labor Representation in Governance as an Insurance Mechanism by E. Han Kim, Ernst Maug and Christoph Schneider. This paper provides evidence that labor participation in firms’ governance enables risk sharing between employees and employers. Firms where employees are represented better protect employees against adverse economic shocks (i.e. employment insurance) while workers pay a form of insurance premium through lower wages.

Governance to Enforce Implicit Contracts between Firms and Workers

There is a long-standing literature investigating the implicit contract between entrepreneurs and workers. The idea that entrepreneurs insure their employees against unemployment risk arising from economic shocks dates back at least to Knight (1921): “The system under which the confident and venturesome assume the risk and insure the doubtful and timid by guaranteeing to the latter a specified income in return for an assignment of the actual results … is the enterprise and wage system of industry” (p. 269-70). This idea was then formalized by Baily (1974) and Azariadis (1975): risk-neutral entrepreneurs provide insurance to risk-averse workers by insulating their salaries and employment from adverse shocks to production, in exchange for a lower average salary.

Examples of firms providing such employment insurance at times of economic stress have attracted attention from politicians and the popular press. In one significant part of his acceptance speech in 2012, President Barack Obama said:  “The family business in Warroad, Minnesota, that didn’t lay off a single one of their four thousand employees during this recession, even when their competitors shut down dozens of plants, even when it meant the owners gave up some perks and pay … understood their biggest asset was the community and the workers who helped build that business…”

Two assumptions are needed for implicit contracts to work: 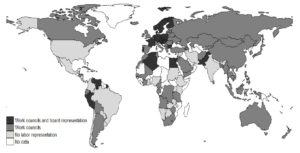 The literature on enforcing implicit contracts has, so far, looked at the role of family owners. Either through their business model or their preferences, family firms may be better placed to provide such employment and wage insurance, as found by Sraer and Thesmar (2007), and Ellul, Pagano and Schivardi (2018). Han, Ernst and Christoph’s paper is the first to look at a contractual mechanism to solve the enforcement challenge.

The authors exploit the parity-codetermination in the German system, whereby the law requires 50% employee representation on supervisory boards when firms have more than 2,000 employees working in Germany. This employment cut-off provides the laboratory used to investigate whether employment and wage insurance is provided and the consequent impact on firm performance. A particularly notable advantage of the paper is that it uses detailed, high quality panel data on employment and wages for all establishments located in Germany over our sample period 1990 to 2008. Establishment level data makes for cleaner identification, free of any incorrect detection of employment insurance that can occur with firm level data.

The paper finds that two groups of workers, white-collar and skilled blue-collar workers, in parity-codetermined firms receive employment insurance: these workers are protected against layoffs during negative (industry-level) shocks. Such employment insurance is not received by workers in non-parity firms. Another group of workers, unskilled blue-collar workers of the same parity firms, receive no such employment insurance during such negative shocks. This is surprising since implicit contract theory suggests that all workers should be protected. The authors argue that this is because unskilled blue-collar workers are not represented on supervisory boards, reinforcing the conjecture that worker participation in governance is necessary to enforce implicit contracts.

The authors are aware that parity-codetermination may not only be an enforcement mechanism but it may also serve to entrench workers, by presenting efficient layoffs during bad economic conditions. Distinguishing between these two competing hypotheses is crucial for the correct interpretation of the evidence. The authors use wage differentials to achieve this objective: while the implicit contract theory implies lower wages as compensation for insurance, no such wage concessions are contemplated by the worker entrenchment hypothesis.

…but Pay Lower Wages and Realize No Shareholders’ Gains

The paper finds that workers with vocational and higher educational qualifications, the two categories from which most skilled blue-collar and white-collar workers are drawn, receive 3.3% lower wages at parity-codetermined firms. The authors interpret this wage concession as a quid pro quo in exchange for employment insurance.

These two results – the cost to shareholders arising from employment insurance and the benefit of lower wages – give rise to a central question: do shareholders benefit from providing insurance? The paper finds that parity firms’ operating performance and valuation suffer more during shock periods compared to non-parity firms. So, it’s important to ask: is the wage concession enough to overcome the negative valuation impact in downturns?

To answer this question, the authors analyze parity firms’ performance and shareholder value through the entire business cycle – over the non-shock and shock periods – and find no impact arising from parity codetermination. On average, parity firms perform no worse or better than nonparity firms. This result implies that any efficiency gains from risk-sharing are mostly captured by workers, and generate no gains to shareholders. Han, Ernst and Christoph use this evidence to argue that firms may not voluntarily adopt labor representation in firm’s governance mechanisms, thus needing a regulatory intervention to introduce such representation.