There is an extensive discussion whether risk-taking incentives play a role in executive compensation. The article How Important are Risk-Taking Incentives in Executive Compensation? by Ingolf Dittmann, Ko-Chia Yu, and Dan Zhang analyses the problem with a calibration of a principal-agent model to observed contracts.

The study makes an important addition to the standard model by assuming that the CEO not only exert costly effort that affects the mean of the stock price but also determines the firm’s strategy that affects the variance of the stock price. Contrary to some critics that risk-taking is bad, this study shows that risk-taking can be good. CEOs are often heavily exposed to firm-specific risk through their large equity holdings, firm-specific human capital, and the employment risk. Without sufficient incentives, risk-averse CEOs will take too little risk rather than innovating, investing, or restructuring. Therefore, we need risk-taking incentives to induce the CEO to take risks that benefit well-diversified shareholders.

The researchers find that including risk-taking incentives does help to explain observed compensation practice. Using a sample of 1,707 U.S. CEOs, the study shows that their model matches the observed compensation contracts much better than the standard model without risk-taking incentives (see figure). Their optimal solution to the model has three features:  First, the optimal contract is convex for medium outcomes, encouraging risk-taking. Second, it protects the CEO from bad outcomes to encourage him to take risk.  While these two features encourage options, the third discourages them. The optimal contract is concave for good outcomes – as the CEO cares less for wealth if it is extremely high.

Finally, the study proposes a new measure of risk-taking incentives that better describes the trade-off between the expected firm value and the additional risk a CEO has to take. The literature commonly measures such incentives using the CEO’s vega – the change in his wealth for a change in stock return volatility. However, the more the CEO’s wealth is tied to the stock price, the more risk-averse he will be. Therefore, the researchers show that risk-taking incentives should not be measured by vega alone, but vega scaled by delta. This measure is potentially valuable for researchers, boards, compensation consultants, and shareholders – to ensure that CEOs are sufficiently tied to their stock price to motivate them to increase effort, but not tied so strongly that they become too risk-averse. In other words, this is a measure of the CEO’s incentives to take “good” risk. 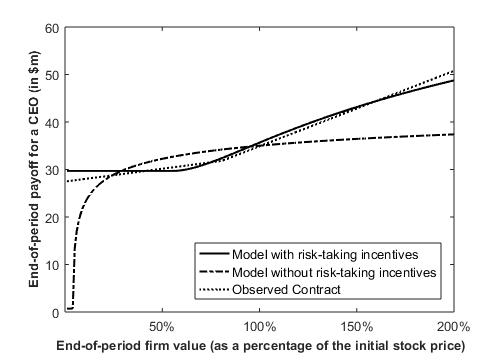