Foreign direct investment (FDI) and alternative financing channels play a significant role in shaping China’s industrial specialization, although standard financing channels such as the banking sector and capital markets have little impact, according to findings in Financial Development and Patterns of Industrial Specialization: Evidence from China, a study by Qing He, Chang Xue, and Chenqi Zhu.

Despite the rapid industrialization in China, it is still under-specialized compared to developed economies. This study aims to deepen our understanding of the factors that limit the extent of industrial specialization in China. Built on the early findings that industrial sectors that are relatively more on external finance develop disproportionately faster in more-developed financial markets, the researchers hypothesize that industries with such a heavy reliance on external financing tend to cluster in areas with better-functioning financial systems. Considering that FDI and alternative financing arrangements such as informal loans from friends and family and loans from underground lending organizations are important contributors to growth in China while formal financial systems such as the commercial banking sector and capital market are inefficient in allocating resources, the researchers predict that the former but not the latter shapes the pattern of industrial specialization in China. In light of the law, finance, and growth nexus, the researchers also predict that the impact of financial development on industrial specialization would be more pronounced in regions with strong institutional environments.

To test these predictions, the researchers gather regional industrial output and financial activities from 1998 through 2010 from various data sources such as Industrial Classification for National Economic Activities, China Statistical Yearbook, the annual issues of Industrial Classification for National Economic Activities. Consistent with the above predictions, they find that standard financing channels play minor roles in determining patterns of specialization, while alternative financing channels and FDI appear to be the important determinants of specialization patterns. Moreover, good institutional environments appear to strengthen the positive effects of financial sectors on specialization patterns.

Although the researchers control for various fixed effects to account for industry or region heterogeneity or macroeconomic shocks, some time-varying factors may affect the region’s financial development and industry specialization simultaneously. To address this concern, the researchers use social capital (measured as per capita voluntary blood donation) as an instrument for alternative financing channels and foreign marriages for FDI. The results regarding the positive role of alternative finance and FDI on specialization remain essentially unchanged. 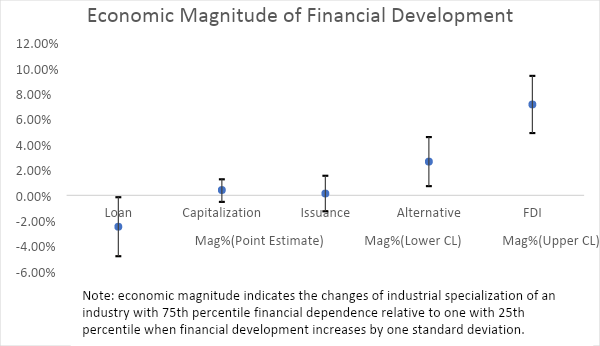