Shadow banking involves credit intermediation activities outside the traditional banking system. In contrast to the United States and Europe, where shadow banking activities have been under ever-increasing scrutiny since the 2008 subprime mortgage crisis, China has witnessed tremendous shadow banking growth since that crisis.

This paper investigates an important yet still understudied constituent of China’s shadow banking system: finance leases. By analyzing a hand-collected transaction-level dataset on the finance leases of China’s public firms for the period 2007-2019, this paper sheds light on China’s leasing market, the second largest in the world. We find that banks use their affiliated leasing firms to provide credit to clients in order to circumvent the government’s targeted credit policy. In contrast to conventional views of regulatory arbitrage, our evidence indicates that, instead of hiding risk and gambling for profit, banks mainly use their affiliated leasing firms to support high-quality clients. The bank affiliated institutions can play a strategic role in relationship banking. We find several pieces of evidence in support of this hypothesis.

All these findings suggest that the function of shadow banking is much more intricate than simply just hiding risk as many expected. The market force could still be working, although in an unexpected fashion, inside the shadow banking system. Based on our findings, policy makers may want to have a careful examination of the economic mechanism behind each type of shadow banking activities and be cautious about making regulation policies to weigh in the pros and cons of shadow banking.

This figure plots the outstanding amount of finance leases in China from 2007 to 2019. 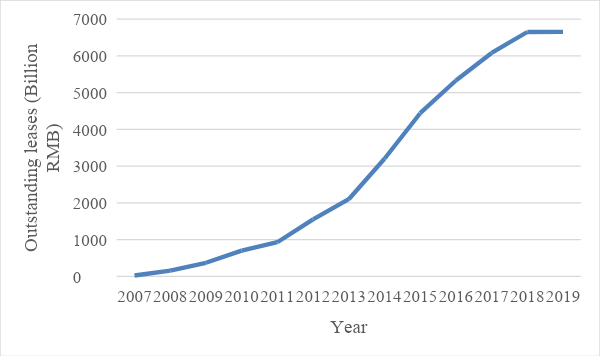