The lead article in Volume 22, Issue 2 of the Review of Finance is Corporate Credit Risk Premia by Antje Berndt, Rohan Douglas, Darrell Duffie and Mark Ferguson. This paper shows that corporate credit risk premia vary substantially both over time and between bonds. It shows that the vast majority of this variation can be explained by expected losses, credit ratings, implied volatilities, investor clientele effects, consumer sentiment, and credit market liquidity.

What Are Corporate Credit Risk Premia?

The corporate credit risk premium is the price that a seller of credit default swap (“CDS”) protection receives over and above what can be explained by expected default losses. Thus, a good starting point is to define a CDS. A CDS is insurance on a bond. Like any insurance contract, a CDS has both a buyer and a seller. For example, a pension fund that owns an IBM bond that matures in 2025 might be concerned that this bond will default. Thus, it can buy a CDS on that bond from a hedge fund (the seller). The buyer of the CDS pays the seller a regular premium, similar to an insurance premium. If the bond defaults, the seller pays the buyer the difference between the face value of the bond and its market value – since this is the amount that the buyer has lost through the default. What constitutes a “default” is defined in the CDS contract, but typically includes the company (IBM in the above example) either (a) going bankrupt, (b) failing to make interest payments, or (c) restructuring its debt in a way that harms existing creditors.

What determines the price of the insurance contract, i.e. the CDS Rate? It comprises of two components:

They find that corporate credit risk premia vary substantially over time. They scale the Credit Risk Premium by the Expected Loss Rate, to calculate the premium per unit of expected losses. This ratio peaked in 2002, during the Global Financial Crisis of 2008-9, and during the second half of 2011 (which was marked by both the European sovereign debt crisis and the US government’s debt ceiling crisis). Its lowest level was 0.7 in March 2005 and its highest was 9.7 in January 2009 – a fluctuation of more than a factor of ten.

Figure 1 illustrates this substantial variation. While expected losses are relatively stable over time, the CDS rate fluctuates wildly. It also shows that the Credit Risk Premium / Expected Loss Rate ratio is countercyclical. It is higher in recessions because they are more risky. Moreover, it is more countercyclical for investment grade bonds than high yield bonds. This is consistent with recessions leading to a decrease in investors’ willingness to sell bond insurance across the board, in an indiscriminate way that does not take into account the fact that investment grade bonds are less risky. Since investment grade bonds are affected to roughly the same degree as high yield bonds, and they are less risky to begin with, the premium per unit of risk rises more in recessions. 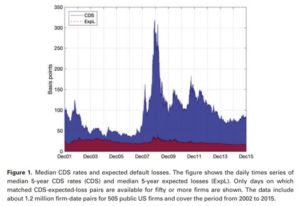 In addition, corporate credit risk premia vary substantially between bonds. Without scaling by the Expected Loss Rate, the Credit Risk Premium is less than 10 basis points of bond principal for Aaa rated bonds, and more than 700 basis points for Ca-C rated bonds. This is logical, since lower-rated bonds are riskier. More surprising is the pattern when scaling by the Expected Loss Rate, i.e. taking into account the fact that lower-rated bonds are riskier. Now, the (scaled) Credit Risk Premium is highest for mid-rated bonds (4.0 for Ba bonds) and 1.4 for Aaa bonds and 2.1 for Ca-C bonds.

Scaled premia also vary across industries, hitting a high of 8.5 for utilities and a low of 0.64 for financials. These differences can be largely explained by the difference in credit ratings between industries.

They find that a reasonable component (26%) of the variation in CDS Rate / Expected Loss Rate can be explained by the expected loss rate itself. A 10% increase in this rate translates into a 4.2% decrease in the ratio. Credit spreads, per unit of expected losses, are decreasing in expected losses.

When adding firm and month fixed effects, the authors can now explain 84% of the variation in the ratio. The final step is to “open the black box” of what is behind the fixed effects. They thus consider two types of predictors for the ratio:

Adding these firm-specific and macroeconomic predictors to the Expected Loss Rate, and dropping the fixed effects, explains 82% of the variation in the CDS Rate / Expected Loss Rate ratio, very close to the 84% explained by fixed effects. Thus, the paper successfully opens the black box of what determines the substantial variation in corporate credit risk premia, showing that these premia vary with firm-level and macroeconomic determinants in a way consistent with existing theories and economic intuition.