Financial contagion is an important phenomenon contributing to the spread and severity of financial distress. Forbes (2012) distinguishes four different, but not mutually exclusive, channels of contagion: trade, banks and financial institutions, portfolio investors, and wake-up calls. Goldstein (1998) informally introduced the notion of wake-up call contagion, whereby a crisis in one region is a wake-up call to investors that induces them to re-assess and inquire about the fundamentals of other regions. Such a re-appraisal of risk can lead to a contagious spread of a financial crisis across regions or to other financial institutions.

Despite the popularity of the wake-up call contagion channel, including among policymakers, there has been little theoretical work. Our paper offers a theory to fill this gap. How can there be contagion even if there is no discernible exposure across countries or financial institutions ex-post, that is at the time of the contagious spread of a crisis? How do the magnitude of the wake-up call contagion effect and the demand for information during the re-appraisal of risk depend on the degree of ex-ante exposure across countries or financial institutions?

We develop a global coordination game of regime change with two regions that move sequentially. A financial crisis comprises a currency attack, a bank run, or a debt crisis and occurs when enough investors act against the regime in their region by attacking a currency peg, withdrawing funds from a bank, or refusing to roll over debt. We define contagion as an increase in the probability of a financial crisis in one region due to a crisis in the other region.

In our model regional fundamentals are linked via the exposure to a common macro shock, which captures common vulnerabilities and institutional similarities of regions. The wake-up call of observing a crisis elsewhere induces investors to acquire costly information about the actual exposure to the common macro shock.

Our second main result is to isolate the wake-up call component of contagion. We show that contagion can occur even if all investors learn that the macro shock is zero, meaning that the second region has no ex-post exposure to the first region. 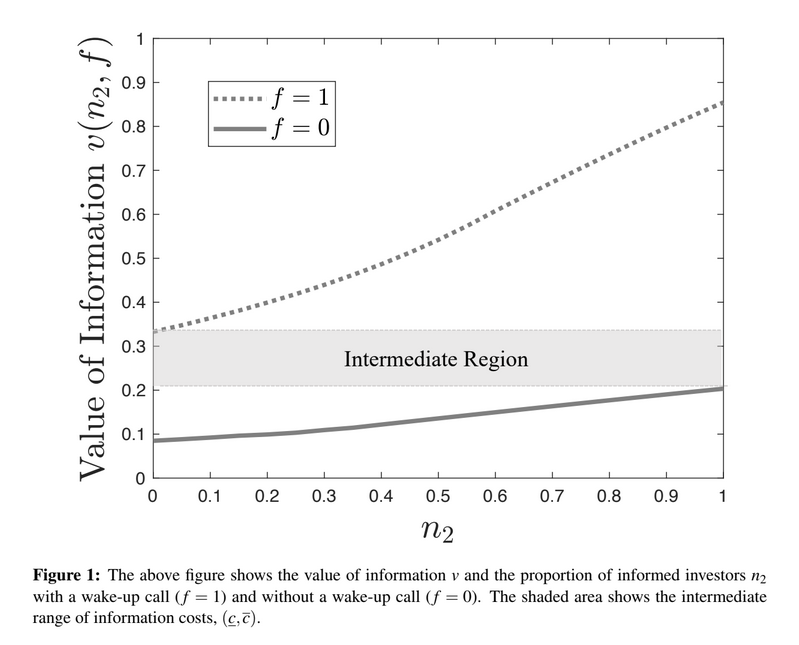